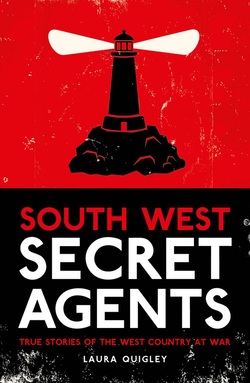 Read about the covert actions of the Helford flotilla, German spies infiltrating the Devonport docks, and the motor torpedo boats of Dartmouth desperately battling the elements to get vital supplies and ammunition to the French resistance. The secret guerilla warriors training with the Home Guard. And in the air: The ‘black ops’ flights over the Channel. The airline for spies. The Hollywood star shot down by the Germans – was he really a secret agent? And what part could a Spanish chicken farmer in Plymouth play in the preparations for the D-Day landings?

OUT IN SEPTEMBER 2014
PUBLISHED BY THE HISTORY PRESS
Say hello here, or check out the facebook page SOUTH WEST SECRET AGENTS

A little bit of background and a few 'thank you's....

I love a good spy story and as I was reading about British espionage in World War Two, I encountered the same phrase over and over: “When I got back to England...”. Whether the agent was in France or Gibraltar or Eastern Europe or North Africa, that same phrase kept coming up, and I thought to myself ‘The English Channel is a very wide expanse of water and very dangerous not only because of the weather but travellers were under constant threat of attack by the Germans during the Second World War. How on earth did all these people – tens of thousands of them - get safely back to England?’ But every spy story I read seemed to end with the agent on a beach or at a port somewhere, and their next sentence would start “When I got back to England..” or sometimes “On my return to London...” which is even more difficult considering the lack of available transport in wartime. So I started researching more about these journeys and discovered that the South West of England where I live was a maelstrom of clandestine activity during World War Two, and so this book was born.

Of course I knew about the bombings and the Blitz, the destruction of Plymouth, Exeter and the attacks on Dartmouth, and the gathering of so many troops ready for D-Day, but I never realised just how many people in the South West were doing so much more than just surviving the attacks; they were fighting back in ways that only an area steeped in the history of smuggling can even imagine.

Much of the activity of these stories is located in western Europe rather than in the South West itself, and I make no apologies for that – these stories are about the agents who brought people home and made the hazardous journeys back and forth across the Channel at a time when Europe was a fortress and at times when there seemed to be no hope of ever defeating the Nazis. And of course these stories are about the people who helped them. They ‘did their bit’ is an understatement – yes, they did their duty, but with imagination, courage and an audacity that I find incredible. At a time when everyone was struggling, when defeat sometimes seemed inevitable, they made the very best of what they had available to them and forged a series of retaliatory strikes against overwhelming odds, continuing over many years, that refused to let the Germans believe they had won anything – for these people, the skirmishes and rescues were not going to end until the Nazis were ultimately defeated.

I hope that this book helps to make many more aware of the actions of their fellow countrymen in South West England during the Second World War. There are still so many more stories out there so check out the excellent books in the References Section. There were so many websites I could recommend that I thought it best to list them as links on this website and they will all be posted here soon. And look out for updates and news on my blog.
Powered by